Release Day: Music is Over! 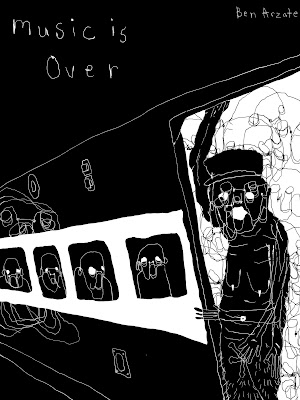 "A cross-dressing noise musician and a young woman with facial scars walk into a bar. This isn't a joke. It's Ben Arzate's new book "Music Is Over," a transgressive subway ride through a soot-blasted, violent, sexually deviant, urban, nightmare. Everything down this rabbit hole is dilapidated, bruised, rusted and torn, from the trains and buildings, to the hearts and souls of its inhabitants. Like a reverse Alice in Wonderland, where instead of finding a land of wonders, our heroes fall into a grimy, post-industrial world of brutality and late-stage capitalism gone awry. Toto, we're not in Tokyo anymore, and the way back definitely isn't clear. Arzate is going to make his readers feel filthy, and it's going to be real hard to get the blood and dirt out from under their fingernails."

"If I could describe this here’s how I would: imagine Arzate has a painters palate with all different, vibrant colors. But those colors are literary genres. He uses absurdism, bizarro, just the smalllllest hint of splatterpunk, a lot of suspense, some Japanese folklore, a little play on The Wizard of Oz, and a whole lot of literary fiction. It’s the most beautifully refreshing book I have read in years. It’s dark and depressing, but has that glimmer of hope, dangled like a carrot at the end of the string."

"Every book is an invitation. Music is Over! is no different. It is a delicate, meticulously curated and balanced mixture of the banal as well as the fantastical… in an almost blink-and-you-might-miss-it sort of way. The Japan you didn’t know existed, as imagined by Arzate! You quickly become ensorcelled, without even realizing that what is happening is actually happening. This is a world in flux, forever transmogrifying… like a cult film you accidentally stumble upon, late at night, long after the final sign-off. There is an obvious mastery of the craft. An invisible and very intense layer of magic. A world-building that makes the illusion that much more grandiose. Once more, every book is an invitation. Make sure to not miss this one!"

Order from Barnes and Noble