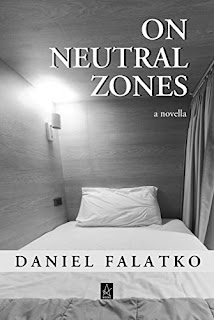 The unnamed narrator of On Neutral Zones is at the end of his rope. His big house in the suburbs is getting too expensive, his marriage with his wife is on its last legs, and he's becoming increasingly alienated from his daughter as she's gone off to college. Finally no longer able to stand either his wife or the crushingly empty space in his home, he leaves to start living in the pod hotels of New York City.

“Pains wracked his ribcage and his eyeballs felt dry and sandy in their sockets. He sat up in the subterranean darkness. 2200 square feet in the house above him. At least 2000 of those square feet unused and out of his control.”

The idea of “pod living” was something I had often heard about before Covid-19 hit and made the idea of living in very close proximity to others seem profoundly undesirable. Even before that, many derided the idea. Falatko even makes references to 4Chan memes which mocked the idea as being indicative to how modern city life is debasing. However, the narrator of this novella finds them comforting. He enjoys having his living situation pared down to the bare minimum and not having to be tied down to one location. The useless number of belongings and empty space in his suburban home had started to induce panic attacks in him.

The novella does not, however, necessarily frame pod living as a desirable solution to suburban expectations. The narrator still has to overcome the space that has developed between him and his daughter. He also finds the community of fellow pod dwellers to be mostly online and lacking. Not to mention his divorce from his wife for just up and leaving her threatens to become very ugly. Towards the end of the story, he also starts sensing that something is going to completely wreck pod living as a viable option altogether. I'm not sure if this was completed before or after Covid-19 hit the United States full force, but it was certainly correct there.

I couldn't help but compare this novella with Falatko's first book Condominium. In that story, a couple moves into a million dollar condo and finds themselves alienated from the community. That novel was very unsatisfying for me. On Neutral Zones, to me, is a much better examination of the angst and pressures felt by the upwardly mobile. The narrator's wife is very bitter, believing strongly in the “keeping up with the Joneses” mentality to an unhealthy degree. One criticism I have of this novella is that it doesn't explore that side very well. She ends up disappearing from the narrative close to the end with no real resolution.

In fact, my biggest problem with the novella is that it undergoes a pretty massive tonal shift. While the narrator struggles with how pod living may not be a viable long term solution, he encounters a private investigator and gets roped in plot involving militant hippies. It feels very out of step with everything that came before and ends up resulting in some difficult reflection that would be required by the narrator being dodged.

Overall, On Neutral Zones is an interesting meditation on modern urban life that takes some unusual turns that don't all work. I would recommend Falatko's second novel, Travels and Travails of Small Minds, over this one. If that one leaves you wanting more of Falatko's work, however, this is worth picking up.

Posted by Ben Arzate at 5:13 PM No comments: 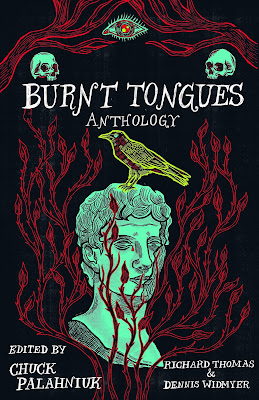 Over at the Minneapolis-based literary magazine Rain Taxi, I have a review of the re-release of the Palahniuk edited anthology Burnt Tongues.