BOOK REVIEW: The Discomfort of Evening by Marieke Lucas Rijneveld 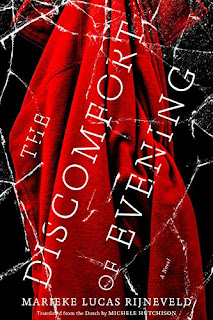 When 10-year-old Jas's brother Matthies passes away in an ice-skating accident, she and her family fall into despair. They all begin coping with it in increasingly bizarre and self-destructive ways. Her father becomes more distant and aggressive, her mother stops eating, and her siblings start engaging in unusual rituals. Jas herself starts refusing to ever take her red coat off to the point it starts to smell and refuses to defecate until her stomach bulges. To make matters worse, an outbreak of hoof-and-mouth disease threatens to kill all of their cattle, the source of their livelihood.

“...according to the pastor, discomfort is good. In discomfort, we are real.”

This debut novel from Dutch author Marieke Lucas Rijneveld is a character study of a young sheltered girl dealing with grief. Because of her lack of experiences, living on a farm most of her life with little media exposure, and her religious upbringing, she finds herself unable to properly express her feelings. To make it worse, she feels a deep sense of guilt because on the day her brother passed, she had prayed for something to happen to him instead of to her pet rabbit.

The repression of her feelings is represented by her refusal to take off her coat and her refusal to go to the bathroom. Both of these build to the point where the idea of being forced to take her coat off itself causes her to nearly have a breakdown and even when she begins to try to defecate, she finds herself unable to. Her repression runs so deep, that she no longer has the tools to let her emotions out.

Jas also begins to lose herself in various fantasies. One of them, that she shares with her sister, is that someone will eventually come along and “rescue” her. She doesn't even seem to really know what this means, but she imagines it in vague terms involving being swept off her feet, fairy tale style, and being taken away from her farm. She also gets the idea, from studying World War II in school, that her mother is hiding Jews in the basement, despite the fact that she never sees any and may not even really under what a Jewish person is.

Because of the strain that their son's death put on their marriage, Jas's mother and father seem unable to console her or dissuade her from any of her odd fantasies. If anything, they make these worse in their attempts. Her father tries to help what he believes to be her severe constipation by forcing soap into her anus. This does nothing except cause her to feel a deep sense of shame. In addition, sexual games by her friends and siblings going through puberty causes her to have an even more dysfunctional relationship with her own body.

This book reminded me a lot of Ian McEwan's The Cement Garden. While in that novel, it shows children whose lives disintegrate because of the passing of a parental figure, this one is about a child whose parental figures are corrupt (the vet), stultified by their own issues (her mother and father), or too distant (her pastor). As such, she's left mostly on her own to figure out her confused emotions and the results are just as ugly.

The Discomfort of Evening is a creepy, visceral, disturbing, beautifully crafted, and incredibly engaging debut novel. Because of its incredibly bleak nature it likely will alienate a lot of readers, but I believe it's one of the best representations of repressed grief and childhood without proper guidance that I've read recently. I very highly recommend this. I look forward to what Rijneveld will come out with in the future.

Buy The Discomfort of Evening in paperback.

Buy The Discomfort of Evening on Kindle.

Posted by Ben Arzate at 7:25 AM No comments: 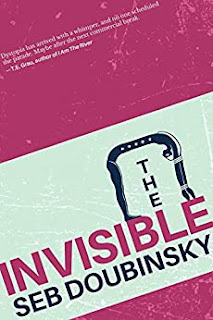 Georg Ratner has recently been appointed the new City Commissioner of the city-state of New Babylon in the midst of an election with the incumbent president, the liberal Maggie Delgado, running against conservative populist Ted Rust. His main focus is to try keep the mysterious, powerful hallucinogenic drug Synth off the streets. However, his former partner, recently appointed head of the city finance department and well-loved poet Jesse Valentino is murdered. Ratner's investigations leads him down a political, metaphysical, and artistic rabbit hole.
"All cities were tombs, after all, and New Babylon maybe even more so than others."
Doubinsky's The Invisible is a mix of noir mystery, fantasy, and science fiction. It takes place in an universe that was built in his other books, however, it stands on its own as well. Doubinsky works the world-building into the story very well, avoiding info dumps and keeping the story moving at a good pace. It also leaves just enough untold to leave one wanting to pick up more of his work to learn more about this world.

One of the major themes of the book is the impact of art. Valentino's murder is at first seen as a random one, despite Ratner's suspicions. His suspicions are confirmed when he learns that other poets in other city-states have also been murdered as well as the publisher of Valentino's newest collection of poetry. Ratner's investigations into the drug Synth also reveal it has rich subculture of artists and musicians, and even finds himself a fan of some it, despite the threat to the establishment that the drug has been labeled as.
I've seen this novel labeled as a "dystopia" in some places, however, I don't find that accurate at all. While New Babylon is filled with corporate and political corruptions, it seems no worse off than the real world. In some ways, it seems a preferable place to live than the United States in the year 2020. The story is very prescient with its election storyline and the mass protests that happen as it picks up steam. There's a sense of optimism to it that many would find refreshing in these times.
The novel is divided into short chapters, some only a paragraph long, and into sections labeled with a tarot card. The first chapter of each section is a tarot card "reading," at least that's what I believe it is. I'm unfamiliar with tarot readings, so I can't say I know what the significance of them is.
The Invisible is an engaging mystery in a fascinating setting. I had a lot of fun reading this and I look forward to reading more of Doubinsky's work. If nothing else, to learn more about the city-state universe.
Buy The Invisible by Seb Doubinsky here.
Posted by Ben Arzate at 11:12 AM No comments:

Invisibility: A Manifesto by Audrey Szasz

This chapbook from publisher of transgressive and experimental books Amphetamine Sulphate is a fragmented novelette that's a bit hard to describe, even by the standards of a press as radical as AS.

The plot, if it could be said to have one, follows two characters. Nina is a young girl regularly abused by her Mother and prostituted to older men. Audrey Szasz is a "girl detective," whose story is told through a series of diary entries and documents, that falls in with a group of serial killer cannibals. These two girls may or may not be the same person.

For only being about about 50 pages, this novelette chops up, distorts, and incorporates numerous genres; crime, coming of age tale, horror, erotica, meta-fiction and mystery. The result is a series of stories that are horrifying, engaging, and very funny. Szasz (the author, not the character) has a great dark sense of humor.

The closest things I can compare to this book is Naked Lunch era William S. Burroughs and Atrocity Exhibition era JG Ballard. Both seem to be obvious influences here, especially since one of her other books is about Ballard, but Szasz has a unique voice that stands all on its own.

I highly recommend this book and after finishing this I'm picking up more of her work right away.

Blood on the Moon by James Ellroy

Lloyd Hopkins is a sergeant in the LAPD  who despises music and can't stop cheating on his wife. When a case involving a man murdering women in a brutal manner comes his way, he dives head first into it between trying to keep his family together, keeping his own fragile mental state together and keeping Internal Affairs off his case for his philandering.

This is one of Ellroy's earlier books. I couldn't help but compare it to his latter ones. For one thing, the prose here is more straightforward rather than the bare bones, telegrammatic sentences of his more recent works. It's also much shorter.

One of the biggest differences is the fact that Lloyd Hopkins is pretty unambiguously the "good guy." In most of his books I've read, even the so-called "good guys" are completely awful people and gleefully corrupt. Here, Hopkins is very flawed, but is without a doubt the hero working to catch a clear villain.

It lacks the dense historical explorations, though the beginning follows Hopkins's response to the Watts Riot. For the most part, however, it takes place in then contemporary early-80's LA. There also isn't much explicit political commentary.

Despite the differences between Ellroy's latter books, it remains a thrilling and engaging crime novel.

Buy Blood on the Moon by James Ellroy here.
The Orchard Keeper by Cormac McCarthy
An old man who lives besides a rotting apple orchard, Arthur Ownby, finds himself caught between a young boy named John Rattner and a bootlegger named Marion Slyder, who had killed John's father unbeknownst to him.
This was Cormac McCarthy's first novel. While it does have many of the themes of his latter books such as crime, biblical references, social outcasts, and decay, it reads as if McCarthy is still developing the voice that he would perfect in his next book, Outer Dark. The prose is far more consistently ornate, where his later ones only occasionally had such passages for emphasis, and the narrative is far more fragmented.
The novel is compared a lot to Faulkner, and it's easy to see why. He uses a lot of similar devices, such as Ownby constantly going between the past and the present due to his senility. This threw me off some, as I'm far more used to McCarthy being pretty straightforward, and I had a little trouble following the story. I also found the characters far less memorable than his other books, which is saying something, given he often creates great characters who don't even have names.
I only really recommend this if you're a huge Cormac McCarthy fan who's read his other books. His other books from his Southern Gothic period (Outer Dark, Child of God and Suttree) are much better. It's interesting to see where McCarthy started, but this novel shows he's a writer who came into his own in his later works.
Buy The Orchard Keeper by Cormac McCarthy here.
Posted by Ben Arzate at 8:31 AM No comments: