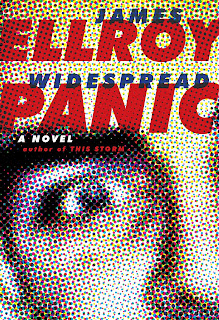 Freddy Otash was a former corrupt L.A. cop turned corrupt private investigator for the tabloid Confidential. In the 1950's, he had dirt on everyone from Caryl Chessman to Marlon Brando to John F. Kennedy. Now dead and stuck in Purgatory, he writes his confessions of all the dirt he did for a shot at escaping.

I'm consumed with candor and wracked with recollection. I'm revitalized and resurgent. My meshugenah march down memory lane begins NOW.

Widespread Panic is James Ellroy's first standalone novel in a couple decades. The majority of them have been part of a series. However, the character of Freddy Otash, who's also a real historical figure, has appeared in Ellroy's books before. The first section of this novel was originally published as an ebook titled Shakedown back in 2012.

Otash's character is best summed up by the fact that his personal motto is, "I'll do anything but commit murder. I'll work for anyone but the Reds." He, however, goes on to do both. In fact, he commits murder very quickly in the beginning as a cop. This is not, however, what forces him to turn in his badge. He's kicked off the force after the chief discovers he slept with a post-op transgender woman. Despite being shaken more by being fired than this revelation, he immediately signs up to work for the slimy magazine Confidential, one of the first tabloids.

Like in Ellroy's other books, Los Angeles is a festering wound of a city. Otash derides the film industry as "Hollyweird," and the moniker is earned. Any celebrity that isn't a rapist, a pedophile, or a sociopath still has unhealthy addictions to drugs or sex. Many take part in underground pornography and hate groups. Any who are otherwise likeable pay for trying to do any good. At one point, Confidential accuses Johnnie Ray of being a regular glory hole visitor. Ray files a defamation lawsuit in return. Otash confronts him and, despite trying to handle it civilly, Otash still ends up beating the shit out of him.

Eventually, Otash finds himself roped into investigating a murder. The wife of the man he killed as a cop turns up dead and he's a suspect as he'd been sending compensation payments to her for his actions. To clear his name and his own conscious, he starts looking into it and stumbles on an underground cadre of communists. Despite his staunch hatred of their politics, he ends up close to the members, even sleeping with one.

For all his prowess as an investigator and his perceived ability to see through people, others still get the best of him more and more. He becomes more self-aware of how greedy and dirty he is, but is incapable of change. The inevitability that he'll lose everything creeps closer and closer as the plot progresses.

Those familiar with Ellroy probably know of how hardboiled and minimalist his prose usually is. This isn't the case with Widespread Panic. It's written from Otash's point of view and his writing is full of alliteration, 50s slang, and sensationalism reminiscent of tabloid writing. That it maintains this style through the 300+ pages and still manages to shift the mood between thrilling, humourous, and depressing without feeling forced is a testament to Ellroy's ability as a craftsman of prose.

Widespread Panic is an entertaining and gripping work of mystery and historical fiction. Some may find the prose takes some getting used to, but those who like their noir dark and sleazy will definitely enjoy this. Ellroy fans will love it and, like me, probably pre-ordered it as soon as it was announced.