The Ego and His Own by Max Stirner

I had read excerpts of this book over the years since I first heard of it, and I was somewhat familiar with Stirner's ideas second hand. So I finally decided to pick this up. I wish I had picked it up sooner. This is a napalm bomb of a book. It was shockingly radical when it was published back in 1844, and it still is.

Stirner's thesis is that all "sacred" concepts like God, the State, the family, and "Man" are nothing but spooks, wheels in the head. He argues that the individual, the Unique, and its will are the only thing that can be considered "real." That might be an oversimplification, but I think it's an accurate summary.

Stirner spends most of his time deconstructing the various sacred cows of his time. For the most part, the book is very easy to understand. The references to contemporary events and to philosophers who are now obscure are probably the most difficult parts. I doubt anyone except graduate philosophy students know who Bauer or Feuerbach are. My edition (and I'm sure most editions in print do) had footnotes that did explain all these references though.

The most striking thing to me about this book is the amount of time Stirner spends attacking the liberal humanism of his time. He argues that they deconstruct the idea of God, only to take the concept of man/humanity and attempt to make it the highest ideal. As he says, "Our atheists are pious people." This attack is just as relevant today. Especially in the case of identity politics which attempts to attack the oppression of various groups, only to subvert the wills of individuals of these groups, demanding they place the group above themselves.

His section on "freedom of the speech/the press" really struck me as well. He points out that most of the people who call for total freedom of the press still want to preserve taboos against speaking on certain things. He also notes that "a free press" that exists by permission of the State is not a freedom at all. So much for "the First Amendment." To Stirner, freedom only comes from the will of the individual. Even under threats of imprisonment and death, the individual is responsible for finding ways around it. The analogy he uses is that if there's a rock in your path, you step around it until you get enough gunpowder to blow it up.

The language in the book is clear, while still maintaining a poetry to it. Stirner engages in a lot of repetition that may annoy some, but to me gives it a certain musicality. There are many striking phrases and metaphors that Stirner uses in explaining his ideas. I once read an article by someone who viewed The Ego and His Own as a literary precursor to Maldoror. While I can't find any evidence that Lautreamont ever read Stirner, it wouldn't surprise me. Both have a freewheeling style and engage in a gleeful desecration of everything held sacred.

It's easy to see why Stirner endures, even if he's not as well known as Ayn Rand or Friedrich Nietzsche. This is an absolutely essential read.

Buy The Ego and His Own by Max Stirner

A Sentimental Novel by Alain Robbe-Grillet

This was Robbe-Grillet's last book before he died. It was originally released in France back in 2007, but didn't get translated and released in the US until 2014.

The story is about a 14-year-old girl named Gigi who has an incestuous relationship with her father. Her father's friend comes over and gives her a gift, a 13-year-old sex slave named Odile who is a former prostitute. There's a lot of whipping, an outing to buy more sex slaves, and an extravagant dinner that culminates in the torture and murder of more prepubescent girls.

Yeah. There's a reason why it took 7 years for this book to receive an English translation.

Subject matter aside, the craftsmanship of the writing of this book is amazing. The prose creates incredibly vivid images. It's a demented and relentless sexual fantasy.

As good as the writing in the book is, I really don't see how this book can be read as anything other than pornography. Books like Mirbeau's The Torture Garden, Bataille's Story of the Eye, and de Sade's 120 Days of Sodom are full of pornographic writing, but work on other levels as well. A Sentimental Novel, on the other hand, reads to me simply as smut. The fact the author has said in interviews that it was based on his sexual fantasies seems to back this up.

It could be read, I suppose, in the context of Robbe-Grillet's theories of a "new novel," which the translator briefly touches on in his preface. Even then, that only really applies to the unorthodox structure (each paragraph is numbered like it's a separate chapter) and the moments of surrealism at the beginning and the end. These moments seem to be there to emphasize that this is all fantasy, and they are beautiful in the prose and the imagery.

I enjoyed the writing enough that I'm adding Robbe-Grillet's other works to my list. As for this one, I only recommend it to people who already like Robbe-Grillet (who probably already have this book anyway), or to people with particularly sadistic and extreme sexual tastes.

Buy A Sentimental Novel by Alain Robbe-Grillet here.
Posted by Ben Arzate at 11:26 AM No comments:

The Next Best Book Blog has allowed me to read two poems from the sky is black and blue like a battered child as part of their "Audio Series." You can hear me read the poems "when my boat has sunk" and "brad" there. I want to thank the editors for enjoying my work and for agreeing to host these.

Listen to the poems here.

Also, don't forget that a number of my reviews are going up at Cultured Vultures. Here are my last three.

I'll also have another installment of my "Brief Thoughts" series up at this blog by the end of the week.

For anyone in the Des Moines area, I'll be reading from the sky is black and blue like a battered child at The Fremont on March 27th as part of Ryan Werner and Gwen Beatty's Domestic Garbage Tour.

Thank you to Miguel Ramierz for inviting me, and to Ryan and Gwen for having me.

And thank you to everyone who reads and supports me, as well.
Posted by Ben Arzate at 11:57 AM No comments:

CHAPBOOK RELEASE: the sky is black and blue like a battered child

I'm happy to announce the release of my first chapbook, the sky is black and blue like a battered child. This chapbook includes 25 poems written between 2009-2015. You can buy it on Amazon in paperback or Kindle. 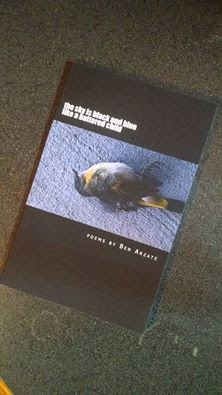 Buy the paperback
Buy the Kindle version
Posted by Ben Arzate at 11:20 AM No comments: