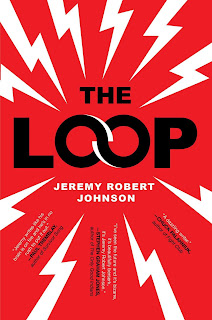 Ever since the biotech company IMTECH came to the small Oregon town of Turner Falls, strange, disturbing things have been happening. A few mysterious deaths followed by a student going berserk and killing a teacher and mutilating another student are only the beginning. Lucy, her best friend Bucket, and her crush Brewer find themselves caught right in the middle when things go completely awry. A night of partying immediately becomes a non-stop fight to stay alive for the three.

“Someone must have the answers, right? Someone must know what we're supposed to do when reality breaks down.”

Those familiar with Jeremy Robert Johnson's work will recognize a lot of the tropes in this novel. It's full of body horror, visceral violence, bizarre imagery, and people losing their minds. One of the things that makes The Loop stand out is that it's almost a bait and switch. While the reader gets hints of what's to come, much of the beginning of the book reads almost like a young adult coming of age novel. It follows Lucy dealing with being something of an outsider in her small town, having been adopted from Peru. The trauma she deals with after witnessing the very first attack of the people-turned-berserkers that eventually overtake the town feels very realistic and is explored in depth. We see a lot of her relationship with her best friend Bucket and her burgeoning romance with Brewer. JRJ spends a lot of time crafting the kind of characters who you wouldn't want to see horrible things happen to.

Then he proceeds to do horrible, horrible things to them.

In general, the novel is a slow burn. Throughout the book, the violence and intensity is slowly dialed up further and further until until the ending, which is like a kaleidoscope of blood and guts. Don't let the silly “World War Z meets Stranger Things” tagline fool you. This is an extremely intense read.

The biggest theme in The Loop is the divide between haves and have-nots and the contempt the former often has for the latter. Lucy and Bucket are both minority immigrants, Lucy being an orphan from Peru and Bucket's family coming from Pakistan (his nickname being a play on his real name Bakhit) and Brewer is from a very poor family. Many of the well-off in the town work for IMTECH and they become the first victims of the experiment that gets loose from the labs of the company. It's strongly implied that the sociopathy of the rich kids in town is what causes the experimental technology to fall into the violent feedback loop which turns its victims into bloodthirsty monsters.

The Loop is an excellently crafted science fiction horror novel and proof that Jeremy Robert Johnson moving from the small press scene into the mainstream has not neutered the intensity of his writing. Both fans of JRJ's prior work and horror fans in general will enjoy this one very much. Highly recommended.

For those who haven't seen yet, the new webzine, Babout 691 has taken me on for essays and reviews. I'm very happy to be a part of it!

My first essay, The Surreality of Liminal Spaces, explores the "Backrooms" phenomenon, liminal spaces, and surrealist art. More reviews and essays will be coming soon.

Thank you to editors Amy Vaughn and Zé Burns for having me.