Review of Valencia by James Nulick at Cultured Vultures

While I put Valencia by James Nulick on my top ten for 2015, I hadn't posted a review. I had written it, but I decided to shop it around to a few other lit sites. Cultured Vultures decided to pick it up.

Click here to read the review.
Click here to buy Valencia by James Nulick
Posted by Ben Arzate at 7:39 PM No comments:

Book Review: Mistah Kurtz! A Prelude to Heart of Darkness 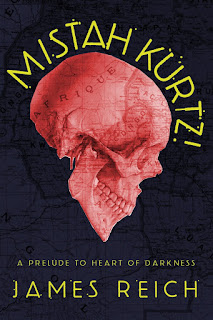 "Edward. Edward Kurtz."
"Yid?"
"I don't think I'm anything." As I put the ivory between my lips, I caught an abstract scent of gunpowder, and something made me say, "Yet."

Heart of Darkness is one of those books that's so heavily ingrained in English speaking cultures, that many people still know many aspects of it despite never having read it. If nothing else, people will recognize the name Kurtz from Apocalypse Now. But even for people who've read the book, how much do we really know about Kurtz? After all, his mystery is part of why he endures so much. James Reich gives his own take on who Kurtz may have been in this novel.


I witness my world as an outsider, slipping out of my skin, observing my pale alienage, my transit, and my station. Out there, the Company men are beetles pushing shit. They bore recklessly into the the slop of the earth, hesitating only to witness the cryptic tunnel collapsing slowly behind them. I am a fly, buzzing my own embodiment, a thousand eye lenses aghast. What is Kurtz? Company man, poet, cannonball, or feral god--we shall find him out.

Mistah Kurtz! tells the story of Kurtz through the papers which he entrusts to Marlow shortly before he dies. Much of it is letters that were originally intended for Kurtz's fiancee back in England. He recounts his teenage years, how he came to the Congo, and how he ended up becoming a god to the natives.

As a teenager, he is scarred by witnessing a public execution, by the abuse heaped on him by his father, and by the death of his mother. While trying to transport his mother's body to be buried in her homeland of England, his father abandons him and he loses his mother's coffin at sea. He also meets Eric Paine, who instills the idea of going to Africa in him.


Eric Paine took strange delight in his African transformation. Had he a mirror, he would have addressed it--without a mirror, he addressed me. I confess that he was, indeed, mesmerizing, in ways that remind me of Monsieur Prudhomme, the butcher of Charleville, or even my father.

In England, he spends some time in a sanitarium due to seizures. There, he takes to producing art and poetry, and his interest in Africa deepens. When he gets out, he spends some time under the wing of a forger, gets caught up in a riot with dockworkers, and meets his fiancee. With the help of her father, he secures a position in the Company and heads off to the Congo. There, his descent/ascension into the mad white god that Marlow would eventually find begins.

The prose in Mistah Kurtz! is intense and vivid. It pulses with the same kind of feverish Modernism that made Heart of Darkness such a gripping classic. Further, Reich brings the violence surrounding Kurtz that was only suggested in Conrad's novel to the forefront.


Sunrise, indigo to pink--I was standing erect within the eviscerated corpse of an elephant, the titanic gray sheath of its hide flowing out behind me, as I forced my head upward through the smashed plates of the cranium, into the bloody hollow where the brain had been.

Reich creates a convincing backstory for the brilliant but troubled character of Kurtz. He takes a more sympathetic approach to the character than what most interpretations of Heart of Darkness I've seen do. For example, most interpret the note left by him that Marlow comes upon, "exterminate all the brutes," as a call to commit genocide against the natives of the Congo. Here, Reich takes a very different interpretation.


The prodigal massacre of the elephants would continue until the station collapsed under the weight of ivory. I shot them down with vengeance, as if the sanctity of the universe depended on it. We gave the hollow child what rites we could. His tiny skull remains in my garden.

The criticism of colonialism implied in Conrad's novel is made explicit in Reich's to a somewhat heavy-handed point. There is an excellent surreal sequence where Kurtz imagines becoming a tumor that kills King Leopold which gets its point across quite well. Shortly after, he also imagines leading the Congolese on a rampage across Europe which climaxes in beheading Leopold. This part is a little too on-the-nose, especially coming so soon after a better meditation on the same theme.

There are also moments when things drag, such as the cliche abusive father that Kurtz reflects on. He haunts Kurtz's memory throughout the book, yet we don't really learn all that much about him. Reich's masterful prose keeps the book from ever derailing, however. The story of Mistah Kurtz! also meets with Heart of Darkness's very nicely.


There are rumors, Chinese whispers along the sycophantic chains of the company, that I am to be arraigned. Kurtz is to be rescinded--my ideas have become paralogical. It is difficult to regard these accounts seriously, since one simple whisper is milled into so many split grains of half-truth, yet perhaps there is one grain of truth among them. The Company is disturbed: good! I have got above my station.

Mistah Kurtz! is an intensely decadent study of one of the most mysterious characters in the Western canon. The prose is as dense and colorful as the Conoglian forests and tells a story as compelling as its predecessor. If you enjoyed Heart of Darkness, Reich's prelude is a must-read.

Pre-order Mistah Kurtz! A Prelude to Heart of Darkness by James Reich here.
Posted by Ben Arzate at 6:06 PM No comments:

Against Nature by Joris-Karl Huysmans

I finally got around to picking this up, thanks to some prodding from how Huysmans factored into Submission.

This book is almost overwhelming in the senses it invokes. The story is relatively simple. A debauched nobleman named Des Esseintes gets tired of his libertine life and cloisters himself away in a castle in a country. He resolves to live a life focused entirely on art and literature.

The details in the book of Des Esseintes's castle, of the art he admires (such as Gustave Moreau), and the discussion of the writers he admires (such as Schopenhauer) are incredible vivid.  One of the most memorable moments is where Des Esseintes has a dream that he's being attacked by a woman who he believes to be syphilis in human form. It's easy to see why this is regarded as one of the best works of the Decadent movement.

Because of how much Huysmans's eventual conversion to Catholicism was a part of Submission, his fixation on religion in this book really stood out to me. Des Esseintes admires many theologians, religious artists, and church music, but he's unconvinced of Christianity.

Despite that, he's even more disgusted with the vacuous modern life of Paris. It's easy to see why, as Des Esseintes is likely a stand in for Huysmans, that he would eventually convert.

This is a beautiful work, and it's easy to see why Houellebecq found so much inspiration in it.

Lump It or Leave It by Florence King

I've been a fan of Florence King since I read With Charity Towards None, a funny and intelligent look at the subject of misanthropy. So I was saddened to hear when she died on January 6th of this year, one day after her 80th birthday.

While I had read some more of her articles online, I hadn't picked up another one of her books since. I decided to grab this one from my library.

Unlike With Charity Towards None, this book doesn't have a central theme. Some of the essays are personal, some are about the hot button political topics of the time, and all of them are entertaining and hilarious.

For example, in her essay on going through menopause, she talks about how the greatest compliment she received from a man was when a pair of obvious purse snatchers decide to leave her alone because "she a mean lady."

She also relates a hilarious story on dealing with a sketchy literary agent that ends with the agent's daughter trying to kill her mother in a bathtub. This is probably the chapter I had the most fun reading. King can tell a great story, and I need to pick up her memoir sooner than later.

On political topics, she shows herself to be an iconoclast. She supports traditional values, but hates traditional value voters because they're all idiots. She's bisexual and hates the gay rights movement, who don't much like her either. She hates feminism, but she can't help but admire the fire and wit that Andrea Dworkin displayed in Letters from a War Zone.

Florence King was one of a kind. One of the best writers of invective since H.L. Mencken. Her death is a great loss to America.

Buy Lump It or Leave It by Florence King here.
Posted by Ben Arzate at 7:37 PM No comments: