ABBA's back in 2021. They've released two singles, they're putting out a new album soon, and they're going on tour together again for the first time in several decades. No better time to pick this up.

The book makes a fairly solid case for Gold being ABBA's most important album, though I still think The Visitors is their magnum opus. The album helped put some distance between the cheesy 70's disco image they were known for and introduced them to a new generation of listeners. For myself, Gold was the first I heard of them as a kid. Even pompous, rockist critics started to take them more seriously. There's a reason several ABBA songs have been covered by metal bands, and not just for the novelty factor.

Reading it did make me realize the main reason why, even now, they're still widely considered a lightweight band for wine moms in spite of their craft as songwriters and musicians, a catalogue of songs that have stood the test of time, and their importance to LGBT+ subcultures. It's not just that they made pop. Madonna made pop, and she's still considered a living legend, even while she keeps embarrassing herself. There's no real mythos to ABBA. They were two couples who made a lot of songs together, both amicably divorced, and then they went their separate ways for years, largely keeping out of the news. The closest to anything is the fact that Frida's father was a German soldier during WWII. Just a soldier, not an SS officer or some war criminal. The ABBA story has no major drama, no suicides, no drug abuse, no mental breakdowns, no controversies, no early deaths. It was just two men and two women making well-crafted pop music. While it shouldn't matter to the music, people still love a juicy story attached to their legends.

Obviously, I love me some ABBA. One of my novels is named after and inspired by one of their B-sides, I'm excited for the new album, and, if they come near me, I'll definitely be going to one of their shows. If you do too, it's worth picking this up and getting some insight into the stories behind the songs and how Gold was put together.

Dead Inside by Chandler Morrison

This book has become somewhat infamous due to both its content and for a reading Morrison did from it which probably did more to kill the convention it was at than Covid-19.

So, what is Dead Inside?

The elevator pitch is that it's a love story between a necrophile and a cannibal. An anhedonic hospital security guard who only feels any sort of pleasure when he's fucking corpses has his world turned upside down when he meets a maternity doctor with a compulsion to eat dead bodies. Specifically infants.

You can tell when Morrison wrote this, he wasn't really going for an extreme horror or splatterpunk story. In fact, one of the flaws in the book is that his influences are a bit too obvious at times. The unnamed title character's excuse of "I have to check the monitors" to get away from people is very reminiscent of Patrick Bateman's "I have to return some videotapes" in American Psycho. He also delivers a rant against normalcy at one point which reminded me a lot of the "choose life" rant from Trainspotting.

For me, it wasn't as shocking or disgusting as others seemed to have found it. This was mostly because there's a dark humor in it which offset a lot of the more unpleasant scenes. This is why I found Less Than Zero more disturbing than American Psycho, the latter has a lot of dark humor and other devices that distance the reader from the horror while the former just plainly describes it.

However, the dark humor was engaging and, at times, hilarious. I also very much enjoyed the story on multiple levels. It works well as a twisted romance. Morrison makes the unlikely scenario sound plausible. The way the main character struggles with his feelings works very well, too. I've struggled with depression most of my life as have some people very important to me. Seeing the way the main character sabotages a chance at being happy because he's pushed himself so far into a fortress of his own misery was all too familiar, even if he's kind of douchebag and he fucks dead bodies. The contrast between how the main character and his love interest deal with their neuroses (to put it mildly) is an interesting look at the different ways people deal with their alienation.

Don't get me wrong, there's still some really offensive shit in this book that will send a lot of people packing upon reading it, so there's your warning. I'm probably just jaded, but this book worked for me on the level of being an examination of people who have to struggle to feel a connection with others than a gross horror story.

Posted by Ben Arzate at 8:32 AM No comments:

As I announced on my social media a couple days ago, I've got two books coming out soon.

The first is a book of plays, tentatively titled PLAYS/hauntologies, coming out from Madness Heart Press. It's currently in the editing stages.

The second is a novel called Music is Over. The cover, done by the very talented Mark Wilson, is below. It will be out from Malarkey Books early next year. In a few days, you'll be able to go to malarkeybooks.com to subscribe to their book club to receive this book and all of Malarkey Books' 2022 releases.

I'm about halfway through my current novel Candy Shopping at the End of the World. I took a break to work on some other things. I'll be back to finishing that and more details will come soon.

Elaine is on sale for $0.99 on Amazon Kindle until Saturday (09/04/21). This is a good chance to head over and grab that if you haven't. If you enjoy it, please also consider picking up its short follow-up, I'm a Marionette. That's available for Kindle Unlimited for free or on Godless.com with bonus material for only $0.50.

Other projects I'm working on include a collection of media-themed horror stories, tentatively titled Saturday Morning Mind Control and Other Fatal Strategies, and an as of yet untitled poetry collection which, so far, is my personal and emotional. I look forward to sharing those both with you all when they're finished. 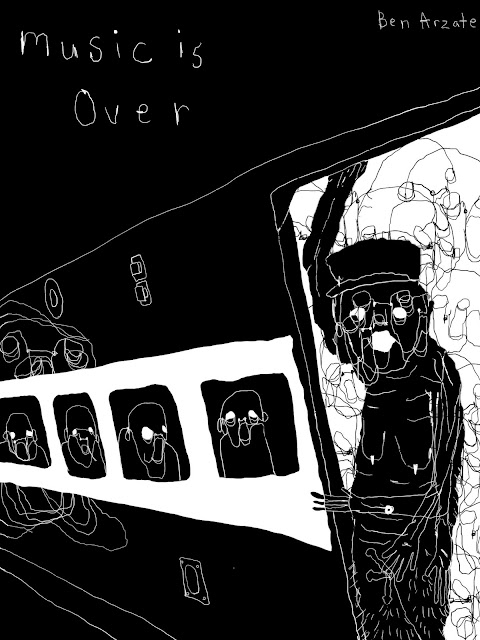 Posted by Ben Arzate at 9:18 AM No comments: