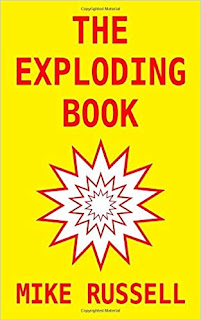 Not long after you, the reader, are pulled into the library of the town of Gladeville, it explodes. This leaves the librarian dead and all books, except for the Dark Book, destroyed. As you, the reader, explore the town, you discover that the town is trapped within a giant box. Many of the inhabitants find they have no concept of things like sex, death, or the existence of any other towns.

The gold temple is both inside you and inside this book but this book is not written in blood and your veins are not running with ink.

The Exploding Book reminds me a lot of Italo Calvino and Jorge Luis Borges. It examines the nature of literature and language through a number of metafiction elements and a fantasy-tinged story. The book is told in second-person, however "you" are essentially given an omniscient viewpoint by being a traveling spirit inside the book.

The various characters of Gladeville often find themselves in a state of confusion, having no language for common things. For example, at one point the chief of police and a reporter find themselves driven nearly mad with lust, but don't understand the concept of "sex." Animal instinct leads them to copulating anyway. This results in the police chief getting pregnant and not understand why, because she also has no concept of "pregnancy" or its connection to sex.

The duck-rabbit optical illusion is a reoccurring motif. It first appears as a hole in the walls surrounding Gladeville and later as an actual creature. The duck-rabbit illusion is often used as an example of the difference between perception and interpretation. The people of Gladeville start religions based on saying the hole is for certain a duck or for certain a rabbit, and the two bitterly clash. In his examination of perception, Russell looks at the difference between genuine curiosity and adherence to dogma.

While the book is heavy on ideas, it also tells a surreal, but mostly straightforward story. The various residents of Gladeville find themselves embarking on their own quests to discover the nature of their reality, prompted by the mystery of why the library has been destroyed. The characters have different arcs all based on trying to sort out the confusion they've found themselves in.

My one complaint about the book, is that it often feels dragged out. There are scenes that go on a bit too long and belabor the point. This is especially true of the ending which does wrap up the story nicely, but involves a lot of repetition that isn't really necessary.

In spite of that, The Exploding Book is still an enjoyable surreal fantasy with a lot of interesting perspectives on language, perception, identity, and literature. I believe this is worth picking up, especially if you've enjoyed Russell's short work in the past.

Posted by Ben Arzate at 7:19 AM No comments: