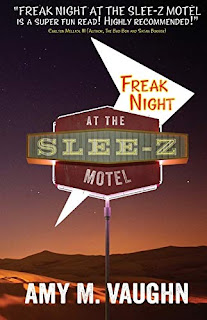 (Disclaimer: Amy Vaughn is one of my editors at Babout 691 and this book was published by the same outfit that published my first novel, The Story of the Y)

Conjoined twins Jackie and Maddie thought they finally found a place to fit in when they joined the Main Event Sideshow, a modern day traveling freak show. When a storm in the Southwest leaves the group stranded at an isolated desert motel, they find themselves under attack by the homicidal owners and discovering the dark secrets of the occupants staying in the other rooms.

“Leslie enjoyed cleaning the rooms. She believed there was a certain way things should be and that keeping things tidy kept the chaos away. When Leslie cleaned a room, she was putting that one little part of the world back in order again.”

Freak Night... is a fast-paced bizarro horror story. It reminds me a lot of Joe R. Lansdale's forays into strange fiction, such as The Drive-In. There's a lot of chaos, vivid action scenes, and a whole lot of blood and guts. The “freaks” are a mix of realistic ones, such an incredibly obese woman and conjoined twins, and more fantastic ones, such as a man with four fully functional arms and a woman with no head. There's also an actual chupacabra. All of it blends well together.

Despite the short length of the story, it still manages to fit a good amount of backstory to many of the characters. The life of the violently bigoted owner of the hotel is especially believable for how they turned out that way. It also manages the flesh out the more minor characters, the other occupants of the hotel, as much as they need to be without stopping the story.

The action is bloody and incredibly entertaining, as is the often dark humor. One could read the book in a couple hours, as I did, like watching a movie. While a mostly satisfying read, the ending does rely on a couple difficult to buy contrivances. I also think it could have added more backstory to some of the other freaks in the Sideshow as well.

Despite that, Freak Night at the Slee-Z Motel is a fun, well-paced slasher novel with a unique cast of characters. Fans of bizarro fiction will certainly enjoy this. Fans of horror fiction who want something off-kilter will want to pick this up too.

Posted by Ben Arzate at 4:15 PM No comments:

The Return of The Unreprinted

The Unreprinted has a new home at Babou 691! Thank you very much to the editors for picking up the column.

The first entry is a look at The Forever Children by Eric Flanders, a diamond in the rough that was Zebra Books.

Posted by Ben Arzate at 9:19 AM No comments: