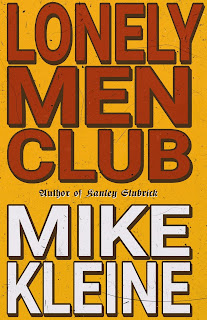 “Created a cipher and sent it to the Vallejo Times Herald. Zodiac = 18, SFPD: 0. Wrote a poem about Delaware. Mailed it to Dave Toschi. Received a bill for $337.41. It was from the government. It had been a long day. Wrote my thoughts concerninggeodisc philosophies in a little book. I feel better when the sky is white.”

To say that Lonely Men Club has a plot is a bit of a stretch. To call it a character study is more accurate, but it looks at the character in the strangest way possible. That's not even just because the character is a time-traveling Zodiac Killer with magic powers who prays, writes, and travels in between committing murders and assaults and taunting the press and police. If I had to describe this book to someone, I'd say it's like a mix between American Psycho and House of Leaves.

Kleine wrote this book, which is over 700 pages and 100,000 words, in five days with the help of various computer programs, making the text partially procedurally generated. As radically different as this is from his other work, even the very experimental Arafat Mountain, there are still a lot of recognizable themes that Kleine comes back to. Travel, pop culture, and empty consumerism drowning out higher truths all run through the book.

I read this book from the beginning of it to the end. That seems like it should go without saying, but as Kleine points out in the introduction and the publisher points out in the afterword, this is not really a book to be read that way. The publisher even states it's the kind of book you never finish reading.

There's a lot of repetition in the book. I had to pace myself reading it to keep from getting annoyed by it, which I think was the right move. It's not so repetitive it kept me from coming back, though. Every few pages there will be something unexpected like a page blank but for a period or text over other text, making it unreadable. It's like the Zodiac Killer's time-traveling and powers are destroying the book itself.

The book has several places where words aren't spaced, creating strange neologisms such as “destroyedomlette” and “fuckedprayer.” Most of the prose is mundane and staccato, with the occasional burst of a strange question or a poetic phrase. Tying into the Zodiac Killer mythos, he's often praying for power and slaves in the afterlife. Despite the fact he aspires for such things, all that he can do with the power he already possesses is kill people, taunt the cops, and wander aimlessly. The book does throw curve balls at some points, in a book that is a curve ball itself, that does end up making very close reading of the text rewarding, despite the fact it the way its written encourages skimming.

Lonely Men Club is a radical book, even by the standards of experimental fiction. A lot of people will be very quickly turned off by it. However, Kleine has created an unquestionably unique book and a piece of text that works as piece of visual art as well. As of writing this, the publisher has this available for free as an e-book on their website. However, I very much encourage anyone interested in this to get the physical book as it loses something without being an object one can hold and flip through.

Buy Lonely Men Club by Mike Kleine here.
Posted by Ben Arzate at 7:46 AM No comments:

The Unrepublished: 10 A Boot Stomping 20 A Human Face 30 Goto 10 by Jess Gulbranson

The Unrepublished is a look at books which are out of print and not available new, even as e-books. What lurks in the depths of these forgotten books? 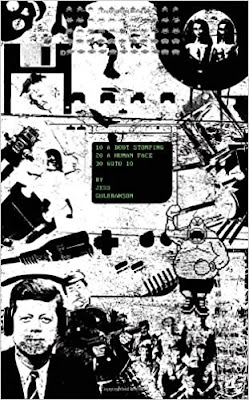 Eric is a relatively normal music-loving hipster. He works a day job in a record shop, he eats pizza almost everyday, and his only major quirk is that he hates computers. However, he soon discovers that he has an unusual talent and finds himself roped into a conspiracy that results in a fight for human freedom, and for reality itself.

“Could you break your brain by thinking too much about the wrong things? I suppose so.”

Generally, when I take a look at books, I try to keep my reviewer hat, which is my penis, separate from my writer hat. The problem is, my writer hat is also my penis, so this tends to cause a big overlap. I couldn't help but notice there were a lot of theme overlaps with my own first novel, The Story of the Y. The main character is a record collection hipster, there are a lot of ghosts and magic, there's a hatred and fear of authority running throughout, and there's a lot of cosmic mystery. I bought this eight years ago, but never got around to reading it until this year. I can't help but feel like if I had read this right after I first bought it, I would have either never written The Story of the Y or it would have been a much better novel. Either way, it's clear that Gulbranson and I are functioning on a very similar wavelength.

The title is both a reference to the famous quote from 1984, “If you want a vision of the future, imagine a boot stamping on a human face – forever,” and to the computer language BASIC. It's not immediately obvious what relevance it has, the story seems to just be about a hipster who discovers he has psychic powers. However, when Gulbranson drops the title in the book, it's certainly earned and doesn't feel forced or cheesy at all.

One of my favorite parts of this book is its sense of humor. I've laughed at few books harder. The funniest chapter is when Eric comes home to his apartment to find that someone has broken in. Nothing has been taken, but someone took a shit on his kitchen floor. After cleaning up, he asks his landlord about it who says he saw someone lurking around the building who resembled “that person in the videos smashing the pumpkins.” When Eric asks if he means Gallagher, the landlord clarifies that he meant music videos. Eric takes this to mean either Billy Corrigan or someone who resembles him is responsible.

It isn't a big surprise to learn that original manuscript for this book was written for the Three Day Novel contest, though it wasn't the winner for that year. It moves along at a very fast pace and one could easily read this in a day or so. I've heard this book considered bizarro, as it was published through Legumeman Books. It could easily be filed under Science Fiction, Urban Fantasy, or Horror without seeming out of place in the least, so bizarro seems as good a classification if any. It has a unique voice written in a manner that feels as natural as the way it mixes genre conventions.

This is an excellent book and it's a shame that it's not only, but that used copies are so difficult to find. The cheapest I could find were copies that are at least $50. Not only that, but Gulbranson hasn't written anything since this book, though he does have scattered stories in anthologies and wrote two other novels before this that are even harder to find. If you can find this book in a used book store, I highly recommend picking this up and I hope this will find a reprinting eventually.
Posted by Ben Arzate at 5:32 PM No comments: