Book Review: Diary of an Oxygen Thief by Anonymous

Diary of an Oxygen Thief by Anonymous 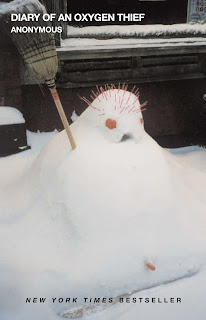 The unnamed Oxygen Thief is a recovering alcoholic who enjoyed emotionally hurting women when he was drinking. Five years sober, he moves from London to take a job in Minnesota. On a business trip to New York, he falls head over heels for a woman who ends up hurting him as bad as he hurt others.

I was intrigued enough to pick this up despite the embarrassing synopsis that the book is like "an alcoholic Holden Caulfield dating Lolita in Bright Lights, Big City." Which makes even less sense after having read it.

While nothing groundbreaking, it's still an enjoyable read. When the O2 Thief verbally abuses one of his girlfriends at the beginning and then gets humiliated by the woman he's in love with at the end, both are appropriately cringe-inducing. Some of the observations about winter in the Midwest and corporate America are also entertaining, though not exactly saying anything new.

Despite the book seeming to be very "love it or hate it" given the mixed reviews, I can't say I felt particularly strongly about it. I can't see what it is about the book that made it a cult hit when it was first self-published to the point that it was eventually picked up by Simon & Schuster.

I might pick up the sequel, Chameleon in a Kaleidoscope (the anonymous author comes up with great titles, I'll give them that), at some point. I'm not in a hurry to do so though.

Buy Diary of an Oxygen Thief by Anonymous here.
Posted by Ben Arzate at 11:02 AM 1 comment: