It's that time of year again. Remember, these are the books I read in 2022, not books that were published that year.

A revenge tale about two fathers finding the men who murdered their sons. The action is exciting and the sense of loss throughout the book is palpable.

A woman who doesn't remember anything about her past studying the strange mansion she finds herself in. A book full of wonderful imagery.

I only put The Three-Body Problem on my honorable mentions last year. While it is a good book, the trilogy really picks up in the second and third book. This one, the third, is an imaginative view into the far, far future when the world is so different, it becomes alien to the present.

7. Tears of a Komsomol Girl by Audrey Szasz

6. Tender is the Flesh by Agustina Bazterrica

One of the bleakest horror books I've read recently, this story about a world where cannibalism is normal is an incredibly affecting story.

5. The Man in the High Castle by Philip K. Dick

A unique alternative history that looks at a Nazi-occupied United States from the perspective of everyday people. It's also full of interesting concepts about the nature of reality and the perception of history. Definitely my favorite of Dick's that I've read so far.

4. The Dark Forest by Liu Cixin

The second in The Three-Body Problem trilogy. The book is a fascinating dive into psychology, sociology on a cosmic scale, and a gripping thriller. My favorite of the trilogy.

The stories of Kiku and Hashi, two boys abandoned in coin-operated lockers as infants. They grow up to become a pole-vaulter with deep anger issues and a queer rock star. The story only gets stranger from there. The best I've read from Murakami so far.

The tragic tale of an undistinguished academic, his failed relationships, and his derailed career. It's an excellent novel about a simple man crushed by the weight of the world.

The story of Jack Levitt, a man who never had it made. This is often labeled a crime novel, but it's more of a study of a man who has to turn to crime to survive. Sad at times, hilarious at others, it's my favorite read of 2022.

- We Need to Talk About Kevin by Lionel Shriver
- The Bottoms by Joe R. Lansdale
- Children of the New Flesh, edited by Chris Kelso and David Leo Rice
- Contempt by Alberto Moravia

Posted by Ben Arzate at 1:41 PM No comments:

Over at my Substack, I have a new review of the latest novel from Bob Freville.

Read it here, and please consider subscribing if you haven't.

Posted by Ben Arzate at 2:31 PM No comments:

I've had three poems in the latest, winter 2022, edition of Door is a Jar magazine.

You can either get it from the website or pick it up at the nearest Barnes and Noble.

Posted by Ben Arzate at 7:35 PM No comments:

Over at the Malarkey Books website, I have two gloomy poems for Halloween.

Also, for the remainder of Halloween today, my book of plays is only $0.99 at Godless.com.

Posted by Ben Arzate at 5:23 PM No comments:

Corpses on the Vine at Substack

Over at my Substack, I posted a surrealist piece that used AI to assist in its creation.

Posted by Ben Arzate at 2:30 PM No comments:

My short story, "Messages from Paradise," has been published over at Expat Press. It's a surreal horror piece written as a series of text messages. Thank you very much to the kind folks at the press for publishing this on their site. 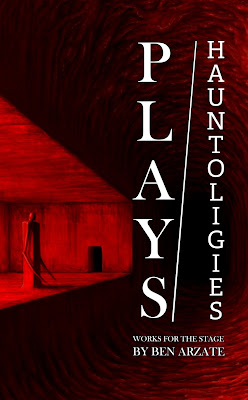 You can watch the book trailer for it here on YouTube.

Christina Pfeiffer of the Mothers of Mayhem podcast had this to say about the book: ""Every play is stunning, beautiful, and forces the reader to question things. But 'An American Demon' is, by far, one of the most beautiful works I have read this year. Just... this is going to live rent free in my head until I die."

If you enjoy the book, please consider giving it a review on Goodreads.

Thank you everyone for your support.