Book Review: From the Belly of the Goat by Donald Armfield 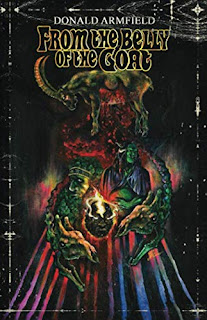 (Disclaimer: Donald Armfield has previously published some of my poems in an anthology he edited.)

From the Belly of the Goat is a collection of five horror stories with a bonus one in the paperback. Donald Armfield's style here is heavily reminiscent of pulp horror and adventure stories. Lovecraft is an obvious reference, but many of the stories are also two-fisted tales of explorers exploring mountains and deep oceans, fighting monster with swords, and journal logs of horrific discoveries.

“Ancient Giraffe Experiment,” the first story, is a bit of a standout in that it's more bizarro horror than the rest. In a series of documents and logs, it recounts a story of the discovery of a giraffe skeleton on the moon. When astronauts attempt bring the bones back to Earth, it unleashes a gas that has a horrific effect on the crew. This is an entertaining bizarro horror story that reads almost like a creepypasta. It's one of the best stories in the book

“Guardians of Cedar Hills” is probably the most Lovecraftian story in the book. A man named Mazin travels to northern Lebanon to explore a forest slowly being lost to deforestation. It's a simple, but effective story of making a horrible discovery in a mysterious place.

“Golem Sanctuary” is a pulp story of a cargo liner captain and his crew gathering parts of a statue from the ocean for a woman with a plan for causing Armageddon. This is a fun story that creates some great apocalyptic imagery. However, it wraps up a little too easily and quickly at the end.

“A Womb for Her Baby” is a pitch black horror comedy about two dumb brothers accidentally releasing a pair of trolls, who go on a rampage in their small Alaskan town. The female troll wants nothing more than a baby, and is trying to find a human baby to eat and give birth to. That sounds a little weird, so read the story if you want an explanation. This is a pretty fun splattery story that maintains the pulp feeling of the prior stories. However, this one has the weakest writing with some very awkward dialogue.

“From the Belly of the Goat” is another Lovecraftian tale. A man recalls his encounter with a strange tribe who create a sickness that emerges from goat bellies and destroys an entire town. This one is close to bizarro horror, but is more surreal with its nonlinearity and unreliable narrator. It's a solid tale for the title.

The paperback version, which I read, also includes the bonus story “The New Albino Race.” A trio of brothers exploring a mountain for artifacts stumble upon an underground race of albinos bent on world domination. This is yet another pulp-inspired, two-fisted tale that's a lot of fun to read and makes a nice addition for those picking up the paperback.

From the Belly of the Goat is a very entertaining collection of tales that mix a little bit of bizarro and splatter horror with nostalgic, pulpy horror, fantasy, and adventure. I definitely recommend this collection for horror fans and people who want some fun, breezy reads with a little edge to them.

(Update: An earlier version of this review mentioned multiple copyediting errors, however, these have since been corrected.)

Buy From the Belly of the Goat by Donald Armfield here.
Posted by Ben Arzate at 7:41 PM No comments:

dr. sodom and mrs. gomorrah is Up for Pre-order on Kindle 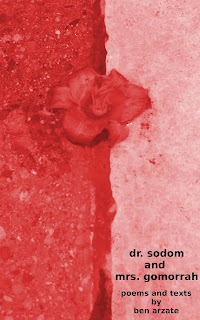 Click here to pre-order dr. sodom and mrs. gomorrah on Kindle. The eBook and paperback will be out 7/10/2020.
Posted by Ben Arzate at 7:00 AM No comments: 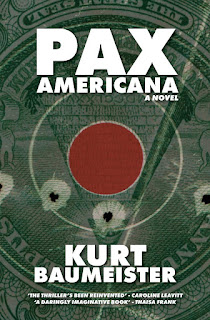 In the year 2034, Dr. Diana Scorsi has developed a powerful AI called Symmetra, which causes all who experience it to believe that it's god. She soon finds herself kidnapped by Ravelton Parley, founder the of the incredibly successful Righteous Burger fast food chain who wants the technology for his own purposes. With Symmetra at the center of a potential international incident with various nations fighting for the technology, government agents Tuck Squires and Ken Clarion set out to rescue Dr. Scorsi before it's too late.

“Whether families or neighbors or armies, the reasons people kept fighting were so often mysterious, so far beyond the realms of ethics or reason, that they might easily seem like the province of otherworldly powers.”

Pax Americana is a satirical sci-fi spy thriller in the vein of Pynchon and Vonnegut. There are numerous absurdities within the world, such as an extended run of Republicans in the White House leading to a ideology known as Christian Consumerism taking hold in America. This results in Christian-theme products and businesses, such as the Righteous Burger, taking over the mainstream. The anti-hero of the book, Tuck Squires, is the opposite of a suave, smooth-talking secret agent. He's a prudish WASP from a rich family who failed upwards into his position. Through most of the book, he's carried by Ken Clarion, a grizzled veteran of the field.

In spite of the many humorous elements, Baumeister plays the spy plot mostly straight. It's full of intrigue, action, backstabbing, and lots of things blowing up. He balances these elements well, creating an entertaining read without losing the satirical looks at religion, American hegemony, and capitalism. This would make for a great film.

The book is incredibly evocative of the Bush administration era. Within the world of Pax Americana, the Iraq invasion was successful and resulted in a series of Republican presidents up until 2034. American hegemony is all but assured (hence the title), but is beginning to unravel due to a failed invasion of Syria. The development of Symmetra is causing even more problems, with every country desperately wanting the technology that would completely upend everyone's understanding of religion.

Religion is often the center of mockery in this novel. Both the anti-hero Tuck Squires and the villain Ravelton Parley are self-righteous Christians who are obsessed with loyalty to American and capitalism, and use both to justify morally questionable things. One scene that stands out in particular is when Parley is pretending to be a Muslim while speaking with an associate from an Islamic theocracy and the result is both a mockery of the Othering of Islam by Americans and of the religion itself. Symmetra itself is essentially a brainwashing program that is able to convince all who interact with it that it's a sort of machine god, which gives the people fighting over it various theological motivations to get a hold of it.

Pax Americana is a funny and entertaining read with a lot to say about the place of religion in society today. It can be enjoyed both for its plot and action as well as it themes. I highly recommend this and I look forward to reading what Baumeister puts out in the future.

Buy Pax Americana by Kurt Baumeister here.
Posted by Ben Arzate at 10:09 AM No comments: