Book Review: Hate From The Sky by Sean M. Thompson 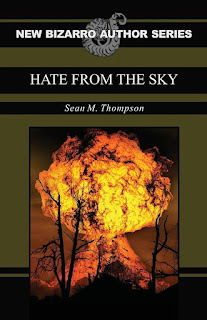 The Sky hates Kyle and Kyle has no idea why. It keeps tormenting him, sending winds, rocks, and
rain to ruin his home, his job, and relationships. With nothing else left for him, he sets off on a journey to either make peace with the Sky or escape it altogether.


“There wasn’t a time of the day or night when Kyle was safe from the atmospheric onslaught. Heavy wind rattled the house, sending tree branches and stones through the glass, through the walls, no matter how late.”

The story here is very picaresque. There's not really a strong plot here. Kyle wanders from place to place getting fucked over by the Sky, emissaries of the Sky, or just most of the people that Kyle runs into. Despite the lack of a strong plot, Thompson keeps it moving in a fun and engaging manner.


The strongest point of this novella is just how funny it is. This is a bizarro book, so one can expect goofy weirdness. While this one isn't as “off the wall” as some other bizarro books, he uses the weird moments to great effect. One of the funniest moments is when Kyle allows himself to get raped by a living bathroom in exchange for information on how to stop the Sky's wrath. The description of it is something to behold.


“The bathroom moaned, and Kyle felt the cold of a metal faucet stretch him, and he cried out. The pain was intense,and he yelled at the phantom to stop, to slow down, to fucking grab some lube or something, but it didn’t stop.”

My favorite moment is where Kyle is arrested by a police officer who's more interested in telling him terrible jokes than with anything else. This part had me laughing hard.


“'Can you hand me your sidearm? That was fucking awful.'

'Are you threatening a police officer, son.'

'No, I am hoping that maybe I can shoot a hole in my head and hit my memory of hearing that terrible fucking joke as the bullet comes out the other side.'”

As funny as this book is, it makes no secret of the fact that Kyle is profoundly affected by how the Sky is treating him. He grows more and more desperate, hurting and humiliating himself and eventually others in his attempts to appease the sky. It eventually drives him to an extremely dark place.


If I had one complaint about this book, it's the ending. I'm avoiding spoilers so I won't go into specifics, but it felt very much like a deus ex machina. It seemed very forced and rushed. Thompson is a competent enough writer that the way he goes about this doesn't ruin the book, but it still feels very much like a cop out, especially given what happens right before the ending.


Despite the weak ending, Hate from the Sky is one of the funniest bizarro books I've read in a while. It's a short read, but a highly entertaining one. If you like absurd comedy, pick this one up.

Buy Hate From The Sky by Sean M. Thompson here.
Posted by Ben Arzate at 1:58 PM No comments:

B. Diehl of Philosophical Idiot has published another piece of work by me. This time it's a flash fiction piece called "A Very Young Something With Wings." As the title suggests, it's a playful tribute to Gabriel Garcia Marquez's "A Very Old Man With Enormous Wings."

Read it here.
Posted by Ben Arzate at 7:41 AM No comments: