An Announcement and a Small Update on Story of the Y

I have some good news. My first collection of short stories, The Complete Idiot's Guide to Saying Goodbye, has been picked up to be released by NihilismRevised. Right now we're planning a late August release date, but that might change. Be sure to 'like' the NihilismRevised page if you're on Facebook for future updates.

Also, Story of the Y is now going to be published through Cabal Books, the new imprint of Thicke and Vaney Books. Be sure to 'like' the Cabal Books page on Facebook as well for more updates on my novel and other great books coming soon from them. 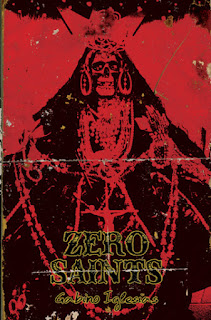 (Disclaimer: Gabino Iglesias did editing work on my forthcoming novel)

Fernando never wanted to come to the United States, but when he chances to kill someone with connections to dangerous men, he flees Mexico for Texas to stay alive. Working as a drug dealer in Austin, he believes himself to be safe. That is until he's kidnapped off the street by some heavily tattooed gangbangers who drag him to an abandoned home and force him to watch them torture and murder a friend. They send him away with a message for his boss: this is their territory and others had better stay out.


Sometimes the best thing that happens to other people is an unloaded gun.

Zero Saints is a book that slams on the gas pedal from the beginning and doesn't let up until the end. That isn't to say that it's non-stop action. One of the best parts about the book is that it takes time building up to its most violent parts. However, even the comparatively quiet moments pulse with intensity. It's the kind of book that compels the reader to sit down and take it all in in one go.

Iglesias packs a lot in this book that's less than 200 pages through his use of precise and vivid detail. For example, as the gangbangers are torturing his friend by cutting off his fingers, Fernando hears a crunching noise when they throw his fingers in a bucket. He never learns what was in that bucket, but it's enough it scares him just as much as watching his friend die. It leaves in him a dread that the reader can feel as the story progresses.

A rudimentary knowledge of Spanish is helpful going into this book, though not absolutely necessary. Because the story is told from Fernando's perspective, he often slips from English into Spanish, especially when he's under pressure or praying. If nothing else, this book is helpful for learning Spanish curse words.

Zero Saints is an excellent novel that mixes crime, horror, and magic realism. If you want a book that's both intense and unique, this is a must read. I look forward to reading more of Iglesias's work.

Buy Zero Saints by Gabino Iglesias here.
Posted by Ben Arzate at 9:11 AM No comments: