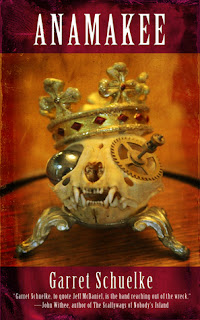 Floyd Spicer is a young man who has moved back home and is attending community college in his hometown of Alpena after failing out of Northwestern University. He attempts to get his life on track by working, applying to WMU, and trying to meet new people. None of it goes well for him.

Anamkee reminds me a lot of Sam Pink's Person. An existential novella about a directionless loser in extremely simple prose. It reads almost like a script in how much the dialogue dominates the story. This isn't a bad thing. Schuelke's dialogue always feels authentic, and at times is pretty funny.

For example, one of the more amusing parts is where Floyd goes into a job interview. He believes it's a manual labor job. When he gets there he finds it to be a pyramid scheme selling vacuums.


Floyd made a fist. "Bump it?"
Robb pointed out the door.
"This may come as a shock to you, but I bet my fist will feel better bumping against the skin on your hand than it will on your face."

The book isn't a comedy, though it has its funny moments. It's not really a drama despite several depressing parts, such as Floyd's borderline abusive father, the loss of his job, and a relationship falling apart for seemingly no reason. In the same vein as Pink, this book is probably best described as Kmart realism.

Floyd Spicer is painfully human. All the bad things that happen to him are sometimes his fault, sometimes completely beyond his control. He's intelligent and shows talent in writing, but he's also very lazy. He's likable enough, but often shows signs of inheriting his father's anger problems.

This novella is Garret Schuelke's first work and it's a very solid one. He paints a compelling picture of the kind of person history is destined to forget. People who enjoy writers like Raymond Carver and Ann Beattie should especially pick this up.