Book Review: The Man Who Lived Underground by Richard Wright 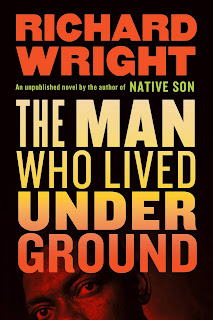 Fred Daniels is an average black man with a job and a wife about to give birth. One day, as he's leaving the home of the people he works for with his pay, the cops snatch him off the street accusing him of murdering the people next door. Despite his protests, they eventually torture him into signing a confession. However, he manages to slip out of their custody and hide in the sewers. In the underground, he finds ways to observe the city above and the guilt that all the people possess.

Outside of time and space, he looked down upon the earth and saw that each fleeting day was a day of dying, that men died slowly with each passing moment as much as they did in war, that human grief and sorrow were utterly insufficient to this vast, dreary spectacle.

Richard Wright wrote this novel right after Native Son. However, it was rejected by his publisher who found the scenes of Fred's torture by police too unbearable to read and the less realist atmosphere making for a poor follow up to Native Son. While a truncated version was published as a short story, this is the first time that the full-length novel as been published.

The depiction of police brutality is as timely as ever. It wasn't unusual, before a lot of modern technology, for police to simply grab someone they could pin a crime on, preferably a black man, and beat a confession out of them. Fred Daniels finds himself caught up in this practice. The scenes of torture are pretty heavy, but don't feel gratuitous. In order to cope with the emotional and physical stress, Fred Daniels depersonalizes and remains that way throughout the book. This is especially relevant when he descends into the sewers.

In the underground, he finds ways to listen in on other people's conversations and the things they do when they think nobody is looking. At one point, he comes upon a choir in a black church. While Fred himself had been in the choir at his church, observing the ritual from completely outside the experience makes it seem to him to be absurd and humiliating. Likewise, when he later breaks into a real estate company and steals the money from the safe, he realizes he has no use for the money underground and uses it as wallpaper in the cave he uses as his room.

Included with the novel is the essay “Memories of My Grandmother.” In it, Richard Wright expounds on the inspirations for the book. He points specifically to his grandmother's religiousness as the main inspiration. As with Fred when he enters the underground, he felt that his grandmother had a sense of living in the world without being of it. This is something that Christianity, especially the stringent brand his grandmother followed, often teaches. With Fred, however, he doesn't come to see a higher power as a hope, rather he sees the connection between his situation and the others and believes he can bring truths that will free everyone when he returns above ground. His inability to articulate these “truths” prove to be his undoing.

Richard Wright considered this his most inspired work and it's hard to disagree with him. The book reads like a waking nightmare with its atmosphere and prose. It examines and indicts the justice system of America and digs deep into the nature of “Otherness” all while telling an engaging and fast-paced story. Even if you haven't read any of Wright's other books, I highly recommend picking this one up.

Buy The Man Who Lived Underground by Richard Wright here.