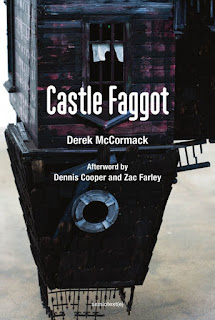 I recall that when I was a child, a religious relative of mine was angry at Disney claiming that they hosted “Gay Days” at their parks. These were apparently days where large groups of gay men would come to the park and parade their, in the eyes of my religious relative, deviant lifestyle in front of families. It would only be until years later that I would learn that these were not something actually sanctioned by Disney, but events organized by gay rights groups and they simply consisted of visits to the park by these groups. Looking back, I wonder what they actually believed these events consisted of. I can only assume it would look a lot like Derek McCormack's Castle Faggot.

Castle Faggot consists of three parts. Part one is a fictional flyer/brochure for a theme park called Faggotland. The titular castle is the center of the park and is described as being full of the bodies of “faggots” who have committed suicide and every surface smeared with shit. The scatological examination of homophobia hits one immediately when you open the book. The visitors of the park are always described as “faggots.” The word is repeated so often, copying the repetition of real marketing materials, that it would lose meaning if McCormack's prose didn't maintain a sarcastic, angry energy throughout.

The bodies of suicide victim “faggots” as the decoration of the theme park attraction is an evocative image. There were many ways that LGBT+ people passed in the struggle for their rights, suicides due to being cast away by family and society among them. Today, many companies will use a display of sympathy towards gay right struggles as a means of marketing despite never giving any meaningful contribution. The bodies of victims become décor in the neoliberal theme park.

The mascots of Faggotland are also cereal mascots; parodies of Count Chocula, Boo Berry, and Frankenberry. The park, the castle, and the mascots are “shown” in a section with blank squares instead of pictures, leaving the actual images to the imagination of the reader. There's also an advertisement for a dollhouse of Castle Faggot, continuing the themes of satirizing homophobia, it declares that “faggots love dollhouses” and tells the ones who buy it to shove it up their asses.

For all the darkness and scatology in the book, it's still very funny. Parodies of French Decadent writers, such as “Stéphane Marshmallarmé,” make appearances. I wonder what it says about my sense of humor that the funniest part of the book to me was when they speak only the word “French” over and over again.

The second part of the book is a narrative called “Rue Du Doo.” This section is a surreal mix of cereal commercials, The Wizard of Oz, Disney films, Rankin/Bass films, and what is likely autobiography from McCormack which also has a surprisingly straightforward story. Count Choc-o-log, the ruler of Castle Faggot, is unable to see himself in the mirror because he's a vampire. However, because he's a stereotypical conceited gay man, he wants to be able to see himself and, believing him to be a wizard, brings Derek McCormack into Faggotland to create him a magic mirror. While McCormack struggles to fulfill the Count's wish so he can go back home, some of the Count's underlings oppose him as they want to keep the vampire dependent on them for compliments.

The narrative has a heavy sense of nostalgia marred by heartbreak and trauma. Films and TV shows are recalled with a sense of humor, but also with cynicism in recognizing their commercial purposes. The fictional Derek McCormack thinks little of his real life before Faggotland due to his sexuality causing severe bullying. There's even a love arc that ends very tragically and maintains that sense of tragedy despite the coprophagia and cartoonish scenes of bats flying into rectums. It speaks very well of McCormack the author that he's able to fit so many emotions into a story so ridiculous and with such a puerile sense of humor.

The final part of the book is an afterword consisting of a dialogue between author Dennis Cooper and director Zac Farley. It serves as a good summation of the themes of the book as well as giving some context surrounding the creation of it.

The day after I received this book in the mail, I was checking for reviews of it and noticed the book had been taken down from Amazon. As of writing this, it's still not up. Whether this is a mistake or whether this was taken down due to the title and the content remains to be seen. This was a book that was always going to push buttons, and it seems to be doing that already. The title alone will be incredibly off-putting to many, and I won't try to convince those who are. However, while a disturbing piece of work, I believe it's an important one. It's a hilarious and insightful look at the effects of homophobia, trauma, and the way sexual identity has become increasingly commodified in the wake of recent civil rights victories.